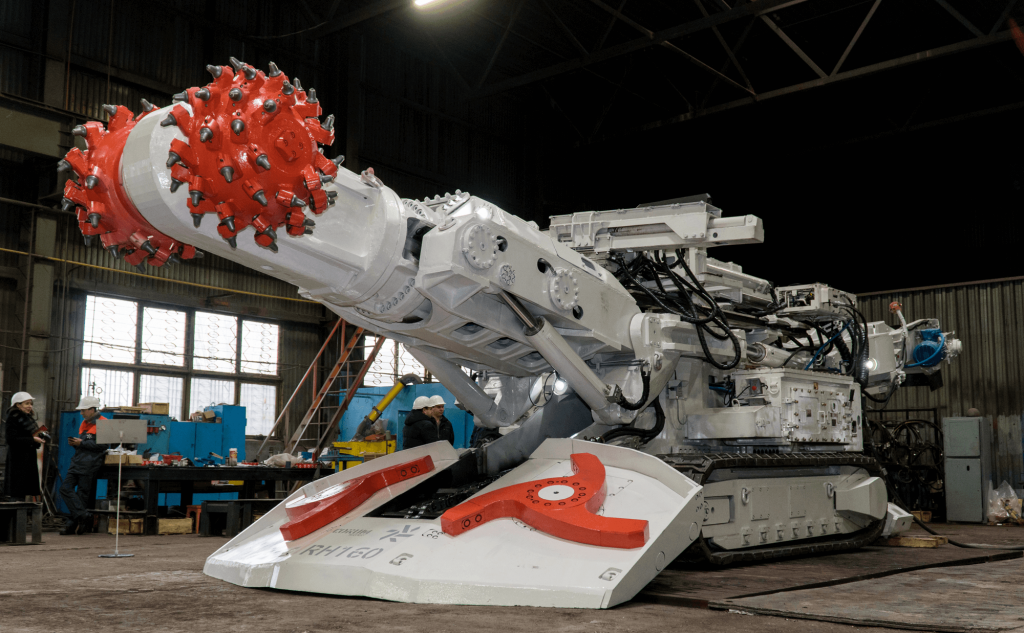 RH160 tunneling machine is the response of mechanical engineers to the Ukrainian miners' request for more powerful and durable tunneling equipment. The machine is meant for mechanical rock crushing and loading in course of new work site preparation. It can crush hard rocks of up to 110 MPa. Another important advantage of the new equipment is its embedded mechanical anchoring system that will make it possible for miners to enforce the front space with anchorage instead of frames. This method is more reliable, fast, cheap, and—most importantly—will make the hard work of tunnelers easier and safer. Control of the new equipment is remote, with the use of portable boards in wired and radio mode. There are no similar solutions available in Ukraine. The mass of the machine is 55 t.

"Our mechanical engineers continuously search for efficient solutions to provide miners with new opportunities to improve the pace of tunneling and coal mining. This is important for the energy independence of our country," says the acting Director General of  Corum Group Mikhail Potapov.  "New machines represent the cutting edge ideas of Ukrainian mechanical engineers aimed at safe and faultless work of the miners."

"The idea of RH160 was conceived by our engineers back in 2013," says Corum manager for tunneling equipment A. Udovichenko. "RH160 was designed based both on our own vast experience and cutting-edge technical solutions of foreign manufacturers. Due to this synergy, this innovation became possible and launches the new generation of medium- and heavy-tunneling machines."

The first RH160 will undergo the industrial testing at the Stepnaya mine of DTEK Pavlogradugol Pershotravenskoe mine administration. Upon successful completion of the test, mechanical engineers will launch serial manufacturing of the machine.

In addition to the tunneling innovation, Corum mechanical engineers will present two upgraded shearers—CLS450 and КА200.

CLS450 shearer with the manufacturer's number 3 is a new technical level machine meant for extraction of thin and medium seams with the landscape varying from 1 m to 2.4 m. It is created in view of the best achievements of the global machine engineering industry in cooperation with the DTEK miners. This is the third machine of this model. The first two have been operating at DTEK Dobropolieugol mine administrations since 2017. The third one will also cut coal at the Almaznaya mine in Dobropolye. As compared to the previous machines, it has an upgraded hydrosystem, reinforced support system, component part protection, and more modern elements of electric equipment. High performance, automated control system, ability to operate under complicated geological conditions, and simple and easily available maintenance are the main advantages of CLS450. The company is planning to present the machine on foreign markets.

Renewed and modernized, КА200 shearer, which has been previously used at the Blagodatnaya mine of DTEK Pavlogradugol Geroyev Kosmosa mine administration, will be presented with new  KBT200 chainless controlling device that will improve machine durability. To improve its performance, Corum engineers equipped КА200 with dragging devices that will collect coal left behind the controlling device and load it onto the conveyer. This will significantly simplify the miners' work, as previously this was done manually.